Continuing our tradition of honouring the people (and dogs!) who Gooi Attitude at our Latitude: we take a look at the story behind the life-size doggy statue at the bridge outside 34 South

The English bulldog Bondi, the ship’s mascot who died during a visit to Knysna in 1931, is commemorated at two places alongside the Knysna Lagoon – at the Waterfront at the Knysna Quays, and on Thesen Island, where he lies buried.

Bondi was given as a present to the crew of the minesweeper, H.M.S. Verbena (details below), in 1928 by the people of Maputo (then Lourenço Marques), during one of the ship’s visits to the city.

The dog’s name was entered in the ship's list as a mascot, which gave him the right to draw an allowance for victuals from the Admiralty.

H.M.S. Verbena visited Knysna regularly, too. During the ship’s third visit, the crew was scheduled to give a variety concert in the Town Hall. and a work party was sent ashore during the afternoon to decorate the venue. For this task, the men marched from the wharf on Thesen Island, uphill to the hall.

It was an extremely hot afternoon and, not wanting to remain behind to stand anchor watch, Bondi followed his shipmates - but sadly collapsed and died shortly before they reached their destination.

Bondi was buried on the wharf just north of the old government warehouse which stood almost where the Garden Route National Park building stands today.

A wooden tombstone placed at the head of a grassy mound marked the dog’s final resting place, its brass plate inscribed, "Bondi of H.M.S. Verbena."

Thereafter, every British ship that visited Knysna would send a detail of seamen ashore to polish the brass and clip the grass on Bondi's grave. Sailors from H.M.S. Delphinium in 1932, H.M.S. Rochester in 1933, H.M.S. Milford and H.M.S. Weston in 1934, and also from H.M.S. Bridgewater, H.M.S. Penzance, H.M.S. Auckland, and H.M.S. Londonderry visited the little memorial to keep it ship-shape.

The tradition continued until the outbreak of World War II in 1939, when the wharf became a restricted area because of its proximity to Thesen’s Boatyard, which was contracted to build more than 600 vessels for the British Navy - including ten 85-ton, 112 ft (34 metre) Fairmile B class motor launches.

With no British ships visiting the port of Knysna, Bondi’s grave fell into disrepair until 1948, when the H.M.S. Nereide (and later that same year, H.M.S. Actaeon) tied up at the wharf and revived the tradition of tending the memorial.

The Nereide would visit on five further occasions, the last being in 1953, but Knysna’s links with the Royal Navy (which dated back to 1817 with the arrival - and immediate wrecking - of H.M.S. Emu) came to an end when the harbour was closed to shipping in 1954. (See Knysna Museum: Maritime Collection.)

After that, unfortunately, the original tombstone was lost.

It wasn’t the end of it, though, because, led by the members of Knysna Historical Society, the people of Knysna erected a new memorial to Bondi on Thesen’s Jetty in the early 2000s, and the South African Navy revived the tradition of tending the grave on 13th July 2001, when men from the mine hunters S.A.S. Umhloti and S.A.S. Umzimkulu polished the brass plate once more.

The tradition was then maintained by ships of the South African Navy whenever they visited for the town’s annual Knysna Oyster Festival - and more recently, by cadets of the local naval training school, T.S. Knysna.

The people of Knysna also commemorated Bondi with a life-size sculpture created and donated by local artist, Karel du Toit.

This sculpture now stands beneath a staircase by the pedestrian bridge that crosses the canal at The Waterfront.

The little statue guards a collection box dedicated to KAWS - the Knysna Animal Welfare Society - which relies heavily on donations from the public “to protect animals, to heal their sickness, to fight cruelty, and to educate others to do the same.”

Visit KAWS on Facebook, and please give Bondi a pat on the head - and leave his living doggy relatives a generous donation - next time you visit us at 34 South.

The Royal Navy’s Flower-class minesweeping sloop, H.M.S. Verbena, was built by the Blyth Shipbuilding Company in Northumberland in England. She was launched on 15 November, 1915.

Flower-class ships were built according to three different specifications: the H.M.S. Verbena was one of 36 vessels of the Arabis sub-class. The designs for these ships were drawn up in 1914.

“The design was highly appealing, as most shipyards were capable of building them, and construction could be completed in five months.

“Like the preceding Acacia and Azalea class sloops, these were single-screw Fleet Sweeping Vessels … with triple hulls at the bows to give extra protection against loss when working.” - Wikipedia

After World War I, H.M.S Verbena was assigned to the Africa Station, where she was based in Simonstown. From there, she paid regular visits to ports along the Southern African Coast. 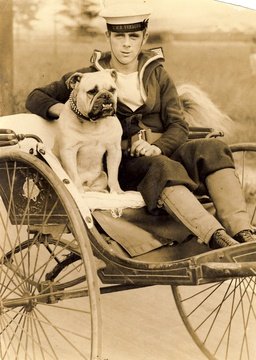 Have you seen our online clothing store?